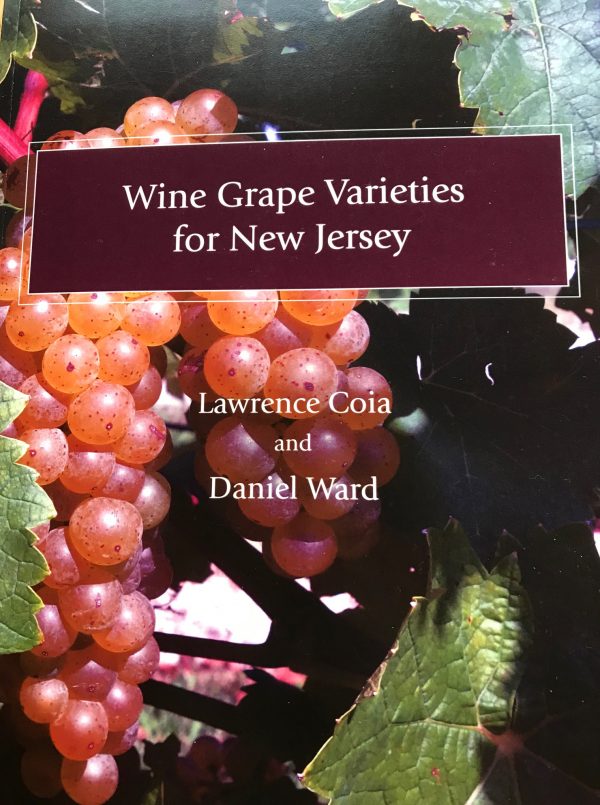 Wine Grape Varieties for New Jersey, by Lawrence Coia, Coia Vineyards, and Daniel Ward, Rutgers/NJAES, is Now Available! It is available for purchase for $29.95 + Shipping and Handling. Please contact OCPVA directly for member pricing. Please enjoy the excerpt below.

In the Spring of 2011 I was asked to join Karl Storchmann (Editor of the Journal of Wine Economics) in speaking to a group of grape growers and wine makers in Pittstown, New Jersey, home to one of Rutgers University’s several agricultural extension services. After our presentations, and some spirited discussion, we adjourned to lunch, accompanied by barrel samples of wines from the 2010 vintage in New Jersey.

Thus occurred my New Jersey wine epiphany! Both Karl and I thought the wines on offer were of excellent quality. How, I wondered, did I live in the state of New Jersey for 50 years without knowing there were such high quality, local products? In the 6 years since that time I have come to realize that I was not alone—New Jersey wines are among the most under-rated in the world. That is not to say that all producers or growers are making superior products, but there are many who do, and the number increases almost monthly.

That single day in Pittstown led to the decision by the American Association of Wine Economists to hold their 2012 annual meeting in Princeton, NJ. Where, people asked, would we find local wines to serve to our members? It turns out the wines were not hard to find, and some were being made only a few miles away. The culmination of the meeting was a blind tasting, arranged in the style of the famous Judgment of Paris (where California wines were compared to French wines). And yes, in this Judgment of Princeton the New Jersey wines were not only competitive with the fine (and very expensive) French wines in the tasting, in some cases they were superior. Indeed, you can read all about it in a Wikipedia entry constructed, in part, by two of the French judges at the Judgment of Princeton.

One thing led to another, and in 2015 I even began planting a small vineyard site with vinifera grapes in South Jersey. We’ve had two small harvests from these young vines, and so far the wine made from those grapes has not disappointed. It is true that rain in September does reduce grape quality (just as it does in Bordeaux). And we have been lucky enough to avoid, so far, any of the deep winters that can completely destroy a vinifera vine.

But you can read all about this and much, much more in this fine book by two of New Jersey’s distinguished agricultural scientists. Larry Coia and Dan Ward have decades of experience with grape growing in New Jersey, and they are uniquely qualified to write this book. I hope that grape growers, wine consumers, and wine makers will take the lessons in this book to heart. There are a lot of mistakes we need to avoid if New Jersey is ever to have the reputation it deserves for fine wine. Things have started to change, but it will be a long hard road traveled before we see the progress the wine industry deserves. I was present recently at the Governor’s Cup celebration in the Governor’s Residence when New Jersey’s First Lady, Tammy Murphy, announced that henceforth only New Jersey wines would be served in the Residence. That is a fine start to the journey.

This book will be excellent guidance for many people, but it is not yet a fully finished project. There is much to learn about grape growing and grape suitability in New Jersey. This book should really be called, Wine Grape Varieties for New Jersey, First Edition. I am already looking forward to the Second Edition!